Is “1” Really the Loneliest Number?

Korea always surprises me with its abundance of PSAs (Public Service Announcements/Ads). The topics range from the seemingly trivial (like brightly colored stickers on the floor reminding people to walk on the right), to more serious issues, like encouraging citizens to report possible threats to national security by dialing “111.”  I suppose the strong collectivist nature of Korean culture is conducive to these messages which try to change public attitudes and behavior. As a relative outsider, I find these ads absolutely fascinating at times.

The following PSA features the bold title, “Only One is Lonely” / “하나는 외롭스니다”. 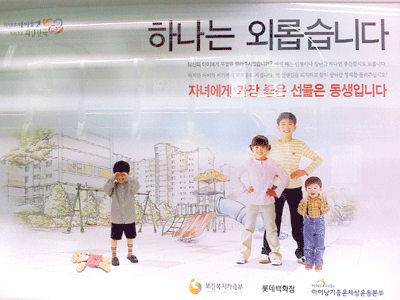 The hapless child on the left, who has thrown his teddy bear on the ground in a tantrum, is apparently an only child. Meanwhile, the three kids on the right are aglow with smiles because they are siblings. The red caption above their head reads, “The best present parents can give their child is a sibling” / “자녀에게 가장 좋은 선물은 동생입니다”.

“What will you give your child? When they are young it may be enough for them to have a doll or a toy. But as they grow older, so will their loneliness. Think of your child’s future and give your child a sibling!”

which basically translates to: 2 or 3 children in each household, a happy and hopeful Korea!

I think the ad in and of itself is fascinating– but it’s also really interesting to consider the backdrop from whence this chiding message came.

Korea has one of the lowest birth rates in the world. It is also a very homogeneous society, with an overwhelming majority of the population of Korean ethnicity. Lastly, there has been a steady increase in the number of immigrants to Korea, especially from Southeast Asia. What do these three ingredients spell? Fear. Yup–the perceived threat to ethnic nationalism has sent the government into a frenzy of activity.  Aside from PSAs like this, the Korean government provides financial incentives (i.e. subsidized educational costs) for a couple’s additional children. Also, doctors in Korea are officially forbidden to tell parents the sex of their unborn child for fear of sex-selective abortion (given the preference for sons, a couple may abort a child if they don’t want the burden of an additional child that is “only a daughter.”) Mind you, all abortion is illegal in Korea, but it is still quite rampant since it is a very lucrative side business for many doctors.

So voila–a very strange PSA is born, and plastered on public surfaces all over the city. Never mind if this method is effective–is it even the “right” thing to do? Should the government be expressing an opinion on something as personal as reproduction and parenting? Is it fair to guilt parents into having more children when the reason why most don’t have more than one in the first place is because the economic burden of raising even one child in Korean society is becoming so cost-prohibitive? This is largely due to the massive failings of the Korean public education system– it is common for parents to spend more than $1000/month/child on private tutors and after-school academies in this fiercely competitive society. Instead of campy posters, shouldn’t the focus be on policies and structural changes that create an environment conducive to parenting more than one child?

I’m certainly not the only one to find this ad a bit misguided. As you can see from the image below, someone scribbled a very direct response on the poster:

What do you think?

Wearing many hats for a living...because who wants to wear just one hat? My many and diverse interests have lead to different blogs so I can give them individual love and attention :)! I hope you enjoy them! END_OF_DOCUMENT_TOKEN_TO_BE_REPLACED
This entry was posted on Wednesday, June 6th, 2012 at 10:48 pm and tagged with birth rate, children, Korea, parenting, reproduction, sibling and posted in Korean Society. You can follow any responses to this entry through the RSS 2.0 feed.
« “So rice to meet you!” — Rice Grain Dolls
Hitchcock’s “The Birds” — Korean Style »

One response to “Is “1” Really the Loneliest Number?”

Penny for your thoughts-- please leave a comment! Cancel reply